Khalid Rauf Qureshi started writing prose and poetry, in the Urdu and English languages, at his early school age… 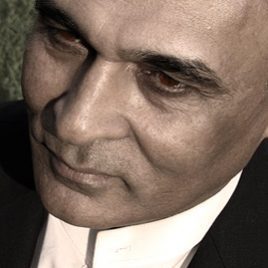 Khalid Rauf Qureshi, born at Abbottabad on July 25, 1946, was raised and educated in Peshawar, Pakistan. He commenced his primary studies at the Presentation Convent School; moved on to Saint Mary’s Cambridge School; and finally joined Edwards College, Peshawar, to complete his college diploma in 1965.
He obtained his professional degree in Civil Engineering from the University of Peshawar in 1969 and worked at the Tarbela Dam Project for a few years, as Field Engineer and later as Senior Planning Engineer, before leaving for Canada.

He graduated from the University of Toronto, with a master’s degree in Structural Engineering, in 1976. During his professional career, as a designer and engineer, he has worked internationally on the structural design and construction of highways and buildings.

Between 1977 and 1990, Khalid Rauf Qureshi successfully completed over thirty highway projects in and around Saudi Arabia.
With an ambition to serve his motherland, he returned to Pakistan in 1991, and served as Chief Engineer for design and construction of the new Agricultural University Complex at Peshawar, Pakistan. He later moved to Sargodha, Pakistan as Resident Engineer, for the construction of the first ever Motorway built in Pakistan, between Islamabad and Lahore. In 1995 he returned, with his family, to Canada and took up permanent residence at Toronto, Ontario.

Presently, he is working on design and construction management of projects, related to industrial and commercial buildings, which incorporate his expertise in both Civil Engineering and Information Technology.

Khalid Rauf Qureshi started writing prose and poetry, in the Urdu and English languages, at his early school age, but rarely published his works.
It was in the mid-nineties when he started publishing his literary material and presenting it in public. To date, he has to his credit several publications including; ten books of Urdu poetry; one Urdu novel; one Urdu book on Pakistani politics; one English book on the concept and practice of Islam; and several other works in progress.

Khalid Rauf Qureshi lives, with his family, in the City of Markham, Ontario, Canada.
Menu